Biomechanics of Running Indicates that Bipedal Dinosaurs Were Warm -Blooded

Novel research on locomotion shows that the earliest dinosaurs may have been warm-blooded.

Studies of present-day animals have shown that endothermic animals are able to sustain much higher rates of energy use. Following from this, if the energy cost of walking and running could be estimated in dinosaurs, the results might show whether these extinct species were warm- or cold-blooded. If walking and running burned more energy than a cold-blooded physiology can supply, these dinosaurs were probably warm-blooded.

But metabolism and energy use are complex biological processes, and all that remains of extinct dinosaurs are their bones. So, the authors made use of a recent work by Pontzer showing that the energy cost of walking and running is strongly associated with leg length – so much so that hip height (the distance from the hip joint to the ground) can predict the observed cost of locomotion with 98% accuracy for a wide variety of land animals. As hip height can be simply estimated from the length of fossilized leg bones, Pontzer and colleagues were able to use this to obtain simple but reliable estimates of locomotor cost for dinosaurs.

To back up these estimates, the authors used a more complex method based on estimating the actual volume of leg muscle dinosaurs would have had to activate in order to move, using methods Hutchinson and Pontzer had previously developed. Activating more muscle leads to greater energy demands, which may in turn require an endothermic metabolism to fuel. 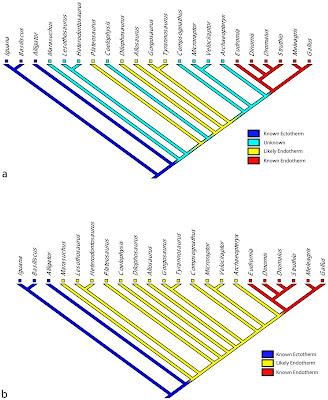 Click to enlarge
Results suggest that based on the energy they consumed when moving, many dinosaurs were probably endothermic, athletic animals because their energy requirements during walking and running were too high for cold-blooded animals to produce. Interestingly, when the results for each dinosaur were arranged into an evolutionary family tree (above), the authors found that endothermy might be the ancestral condition for all dinosaurs.

This early adoption of high metabolic rates may be one of the key factors in the massive evolutionary success that dinosaurs enjoyed during the Triassic, Jurassic and Cretaceous periods, and continue to enjoy now in feathery, flying form. link

Want to learn more about dinosaur locomotion? Come check out the new dinosaur exhibit at the CMNH.