Schinderhannes & the Origin of Claws 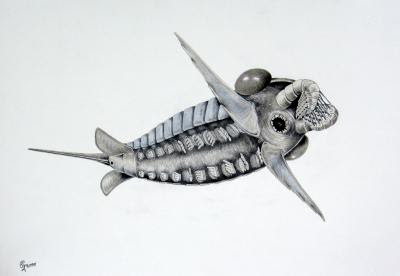 A missing link in the evolution of the front claw of living scorpions and horseshoe crabs was identified with the discovery of a 390 million-year-old fossil, Schinderhannes bartelsi.

With a head like the giant Cambrian aquatic predator Anomalocaris and a body like a modern arthropod, the specimen (below) is the only known example of this unusual creature. The fossil's head section has large bulbous eyes, a circular mouth opening and a pair of segmented, opposable appendages with spines projecting inward along their length. The trunk section is made up of 12 segments, each with small appendages, and a long tail spine. Between the head and trunk, there is a pair of large triangular wing-like limbs — that likely propelled the creature like a swimming penguin. Unlike its ancestors from the Cambrian period, which reached three feet in length, Schinderhannes is only about 4 inches long. 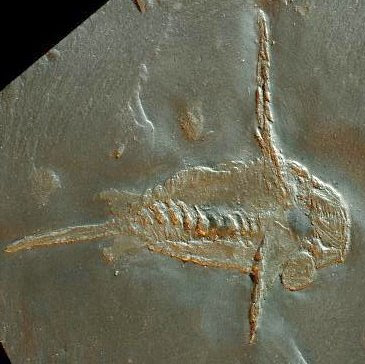 Steinmann Institute/University of Bonn
Scientists have puzzled over the origins of the paired grasping appendages found on the heads of scorpions and horseshoe crabs. The researchers suggest that Schinderhannes gives a hint. Their appendages may be an equivalent to those found in the ancient predatory ancestor, Anomalocaris — even though creatures with those head structures were thought to have become extinct by the middle of the Cambrian Period, 100 million years before Schinderhannes lived.
Posted by Michael J. Ryan, Ph.D. at 9:32 AM