Aurorachelys Migrated from Asia to NA Over a Tropical Arctic 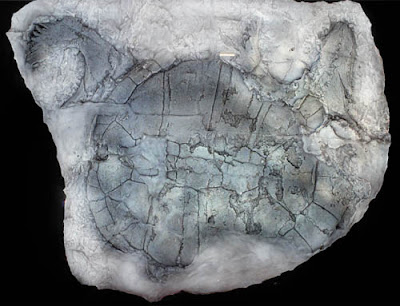 The discovery of a tropical, freshwater, Asian turtle in the Canadian high arctic suggests that animals migrated from Asia to North America not around Alaska, as once thought, but directly across a freshwater sea floating atop the warm, salty Arctic Ocean.

The finding also suggests that a rapid influx of carbon dioxide some 90 million years ago was the likely cause of a super-greenhouse effect that created extraordinary polar heat.

"We've known there's been an interchange of animals between Asia and North America in the late Cretaceous period, but this is the first example we have of a fossil in the High Arctic region showing how this migration may have taken place," says John Tarduno. "We're talking about extremely warm, ice-free conditions in the Arctic region, allowing migrations across the pole."

Together with collaborator Donald Brinkman of the Royal Tyrrell Museum of Canada, they later named the fossil Aurorachelys, or aurora turtle. The turtle strongly resembles a freshwater Mongolian species, which raised obvious questions about how it came to be in the marine waters of the North American Arctic.

At the time the aurora turtle lived, the Arctic Ocean was probably even more separated from the global oceanic circulation system than it is today. Numerous rivers from the adjacent continents would have poured fresh water into the ancient Arctic sea. Since fresh water is lighter than marine water, Tarduno thinks it may have rested on top of the salty ocean water, allowing a freshwater animal such as the aurora turtle to migrate with relative ease.

"We found this turtle right on top of the last flood basalts—a large stretch of lava from a series of giant volcanic eruptions," says Tarduno. "That leads us to believe that the warming may have been caused by volcanoes pumping tremendous amounts of carbon dioxide into the Earth's atmosphere. There's evidence that this volcanic activity happened all around the planet—not just the Arctic. If it all happened on a short enough timescale, it could cause a super-greenhouse effect."

The paper will eventually turn up in Geology
Posted by Michael J. Ryan, Ph.D. at 9:44 AM