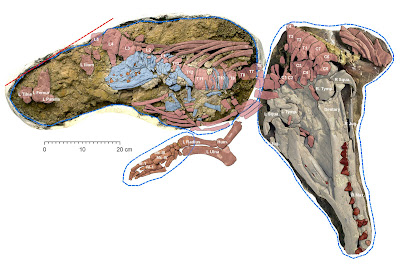 Fossils of female Maiacetus inuus with near-term fetus in utero, as found in the field. The female's skull is shaded white (teeth brown), and other parts of her skeleton are shaded red. The single fetus, in birth position inside the mother whale, is shaded blue (teeth orange). UMMNH

Two newly described fossil whales---a pregnant female and a male of the same species--reveal how primitive whales gave birth and provide new insights into how whales made the transition from land to sea.

The 47.5 million-year-old fossils, discovered in Pakistan in 2000 and 2004, are the first discovery of a fetal skeleton of an extinct whale in the group known as Archaeoceti, and the find represents a new species dubbed Maiacetus inuus. (Maiacetus means "mother whale," and Inuus was a Roman fertility god.) The fetus is positioned for head-first delivery, like land mammals but unlike modern whales, indicating that these whales still gave birth on land.

Another clue to the whales' lifestyle is the well-developed set of teeth in the fetus, suggesting that Maiacetus newborns were equipped to fend for themselves, rather than being helpless in early life.

Male Maiacetus inuus. John Klausmeyer & Bonnie Miljour/UMMNH
The 8.5-foot-long male specimen, collected four years later from the same fossil beds, shares characteristic anatomical features with the female of the species, but its virtually complete skeleton is 12 percent larger overall, and its canine teeth or fangs 20 percent larger. Such size discrepancies are not uncommon among whales and their kin; in some species the females are larger, while in others the males are slightly to considerably bigger. The size difference of male and female Maiacetus is only moderate, hinting that the males didn't control territories or command harems of females.

Like other primitive archaeocetes, Maiacetus had four legs modified for foot-powered swimming, and although these whales could support their weight on their flipper-like limbs, they probably couldn't travel far on land.

"They clearly were tied to the shore," Gingerich said. "They were living at the land-sea interface and going back and forth."
Posted by Michael J. Ryan, Ph.D. at 7:57 AM