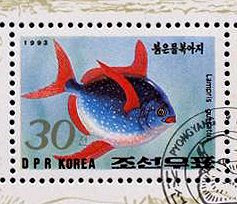 image
For every palaeontologist who’s ever had the question, “were dinosaurs cold or hot-blooded?”, here’s another twist to throw in your answer:

Abstract: Cranial endothermy evolved independently in lamnid sharks, billfishes and tunas, and is thought to minimize the effects of ambient temperature change on both vision and neural function during deep dives. The opah, Lampris guttatus, is a large epipelagic–mesopelagic predator that makes repeated dives into cool waters to forage.

To determine if L. guttatus exhibits cranial endothermy, we measured cranial temperatures in live, decked fish and identified potential sources of heat and mechanisms to conserve heat. In 40 opah (95.1±7.6 cm fork length), the temperature of the tissue behind the eye was elevated by a mean (±s.e.m.) of 2.1±0.3°C and a maximum of 6.3°C above myotomal muscle temperature (Tm), used as a proxy for ambient temperature.

Cranial temperature varied significantly with Tm and temperature elevation was greater at lower Tm. The proximal region of the paired lateral rectus extraocular muscle appears to be the primary source of heat. This muscle is the largest extraocular muscle, is adjacent to the optic nerve and brain and is separated from the brain only by a thin layer of bone. The proximal lateral rectus muscle is darker red in color and has a higher citrate synthase activity, indicating a higher capacity for aerobic heat production, than all other extraocular muscles. Furthermore, this muscle has a layer of fat insulating it from the gill cavity and is perfused by a network of arteries and veins that forms a putative counter-current heat exchanger. Taken together, these results support the hypothesis that the opah can maintain elevated cranial temperatures.
Posted by Michael J. Ryan, Ph.D. at 10:50 AM