Hedin was a Swedish explorer and geographer, born in Stockholm, who led four multi-year expeditions into Central Asia between 1897 and 1935. Although not as well known as Roy Chapman Andrews his work in the 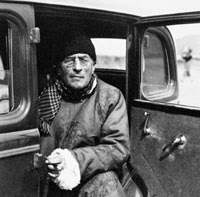 An excellent summary of Hedin’s life and expeditions into Central Asia can be found at the IDP News Archives image
Posted by Michael J. Ryan, Ph.D. at 8:13 AM