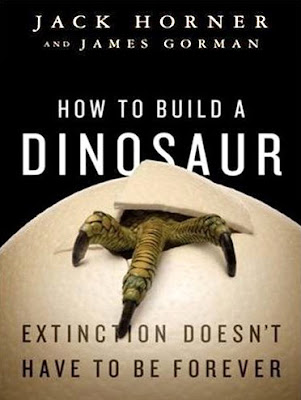 Jack Horner has a new book coming out shortly in which he lays out his plan to resurrect a dinosaur. Wired magazine has a Q&A with Jack in its current issue that you can read in its entirety here.

“Flip the right genetic switches in a chicken embryo and you just might hatch a baby dino. Paleontologist Jack Horner intends to do it. He explains his scheme to rewind evolution in a new book, How to Build a Dinosaur: Extinction Doesn't Have to Be Forever. We asked him if there is anything—anything at all—that could possibly go wrong.

Wired: Dinochicken—walk me through the concept.

Jack Horner: Birds are descendants of dinosaurs. They carry their DNA. So in its early stages, a chicken embryo will develop dinosaur traits like a long tail, teeth, and three-fingered hands. If you can find the genes that cancel the tail and fuse the fingers to build a wing—and turn those genes off—you can grow animals with dinosaur characteristics.”