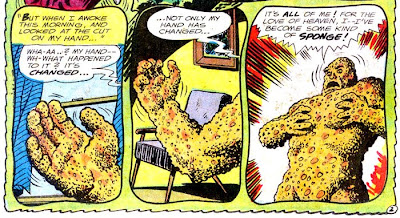 Challengers of the Unknown © DC Comics

Scientists have found the oldest evidence for animals in the fossil record.

The researchers examined sedimentary rocks in south Oman, and found an anomalously high amount of distinctive steroids are produced by sponges that date back to 635 million years ago, to around the end of the last immense ice age.

The researchers argue that the discovery of the sponges is evidence for multicellular animal life beginning 100 million years before the Cambrian explosion that began about 530 million years.

According to Gordon Love, the climatic shock of the extensive glacial episodes of the Neoproterozoic era (1000-542 million years ago) likely caused a major reorganization of marine ecosystems, perhaps by irrevocably altering ocean chemistry.
"This paved the way for the evolution of animal feeders living on the seafloor," he said. "We believe we are converging on the correct date for the divergence of complex multicellular animal life, on the shallow ocean floor between 635 and 750 million years ago."

The steroids that Love and his colleagues observed in the Omani rocks are essential biochemicals present in the cell membranes of the sponges, and help provide the membranes with structural support. The sponges are a few millimeters in size, immobile, and were filter feeders existing on the seafloor. link
Posted by Michael J. Ryan, Ph.D. at 9:36 AM