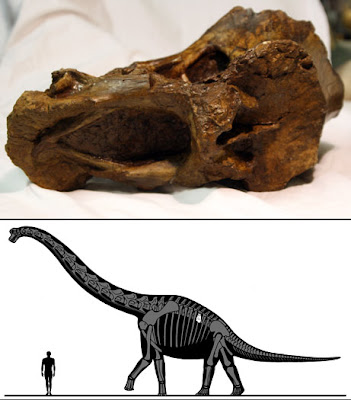 The newly revealed herbivore was identified from a fragment of backbone stored at the Natural History Museum in London since the 1890s. The fossil laid unnoticed until 2006, when it was chanced upon by visiting dinosaur researcher Mike Taylor from the University of Portsmouth in England.

Having spent the previous five years "doing nothing but looking at sauropod vertebrae," he immediately realized the half-complete fossil bone was "something strange," Taylor said.

Investigation of the 30cm fossil subsequently revealed an unknown species that lived some 140 million years ago. The newly named Xenoposeidon proneneukus was likely typical for a sauropod, with a huge body, long neck, and stout legs. But its many unusual spinal features puts it in a new family of dinosaurs, the study says.