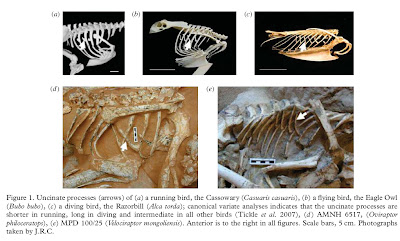 Abstract: In 1868 Thomas Huxley first proposed that dinosaurs were the direct ancestors of birds and subsequent analyses have identified a suite of ‘avian’ characteristics in theropod dinosaurs. Ossified uncinate processes are found in most species of extant birds and also occur in extinct non-avian maniraptoran dinosaurs. Their presence in these dinosaurs represents another morphological character linking them to Aves, and further supports the presence of an avian-like air-sac respiratory system in theropod dinosaurs, prior to the evolution of flight.

Here we report a phylogenetic analysis of the presence of uncinate processes in Aves and non-avian maniraptoran dinosaurs indicating that these were homologous structures. Furthermore, recent work on Canada geese has demonstrated that uncinate processes are integral to the mechanics of avian ventilation, facilitating both inspiration and expiration.

In extant birds, uncinate processes function to increase the mechanical advantage for movements of the ribs and sternum during respiration. Our study presents a mechanism whereby uncinate processes, in conjunction with lateral and ventral movements of the sternum and gastral basket, affected avian-like breathing mechanics in extinct non-avian maniraptoran dinosaurs.
Posted by Michael J. Ryan, Ph.D. at 11:59 AM