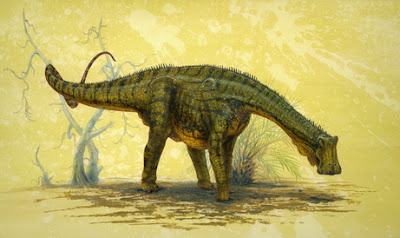 Nigersaurus, a younger cousin of the more familiar North American dinosaur Diplodocus, is small for a sauropod, measuring only 30 feet in length. It managed to sustain its elephant-sized body with a featherweight skull armed with hundreds of needle-shaped teeth, said Sereno. Barely able to lift its head above its back, Nigersaurus operated more like a Mesozoic cow than a reptilian giraffe, mowing down mouthfuls of greenery that consisted largely of ferns and horsetails.

The dinosaur’s oddest feature was a broad, straight-edged muzzle, which allowed its mouth to work close to the ground. Unlike any other plant eater, Nigersaurus had more than 50 columns of teeth, all lined up tightly along the front edge of its squared-off jaw, forming, in effect, a foot-long pair of scissors.

“Some of these unusual sauropods thrived to become the pre-eminent ground-level feeders of the Mesozoic,” said coauthor Jeffrey Wilson, assistant professor at the University of Michigan.

Coauthor Lawrence Witmer, professor at Ohio University, who imaged the brain and organ of equilibrium, said, “What we have here is the first good look at a sauropod brain, and it has important things to say about this animal’s posture and behavior.”

See also the cover article in the December 2007 issue of National Geographic magazine, “Extreme Dinosaurs.”
Posted by Michael J. Ryan, Ph.D. at 7:13 AM