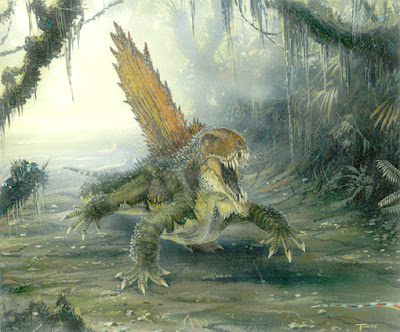 painting © Todd Marshall
Earth witnessed its most severe mass extinction 250 million years ago. This extinction has been thought to be abrupt and probably caused by an extraterrestrial impact. However, Xie et al. present several lines of geochemical evidence from a South China section (an optimal section to study the biotic crisis) that indicates a two-episodic global change in association with the ecological crisis.

The global carbon cycle, the enhanced terrestrial weathering, the marine photic zone euxinia, the faunal mass extinction, and the cyanobacterial expansion all occurred as two episodes, showing a close coupling among the ocean, the atmosphere, and the land system at that time. In particular, Xie et al. found that the first episode occurred before the presumed bolide impact.

The temporal sequence of these two events suggests that the biotic crisis was a consequence of prolonged and episodic changes in the marine and continental systems, and argues against an extraterrestrial impact as the main cause.
Posted by Michael J. Ryan, Ph.D. at 5:55 PM