A Dino In ROM's Attic 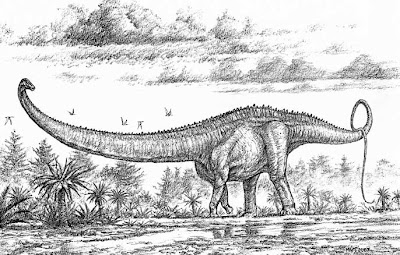 Image © Michael Skrepnick, done especially for the ROM
From the Toronto Star:

For its permanent exhibition opening Dec. 15 in the new Crystal wing, the Royal Ontario Museum (ROM) wanted a sauropod – one of the huge, long-necked, lumbering creatures that unmistakably says "dinosaur."

"I saw half an arm bone in a drawer and 25 feet away there was the other half. I picked it up, walked it over and stuck it on the end. Wow!

Evans pieced together one of only six Barosaurus skeletons known to exist. Of them, the ROM's is the second most complete, with more than 1,000 fossilized pieces. One lay before Evans as he spoke, a fossilized thigh bone weighing 150 kilograms.

The bones were acquired in 1962 from Pittsburgh's Carnegie Museum of Natural History by ROM curator Gordon "Gordo" Edmunds. He planned to mount them in 1970. That didn't happen. He retired and later died, and the story of the bones might have died with him if not for Evans's chance reading.

New York's American Museum of Natural History holds the most complete Barosaurus skeleton. The ROM's will rank as Canada's largest dinosaur on display. Pieces the museum doesn't have will be cast.
Posted by Michael J. Ryan, Ph.D. at 10:03 PM