How To Make A Rib 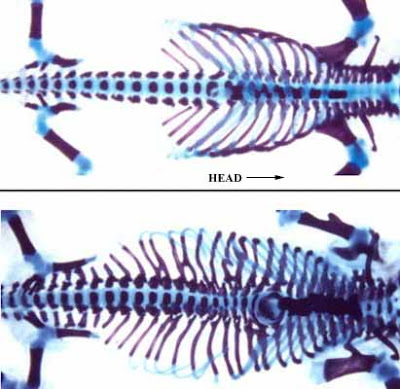 Mice have a ribcage with 12 pairs of ribs (top). When the gene Hox6 is activated in ribless regions of the embryo, extra ribs are formed, extending from the ribcage to the tail (bottom). Image: M. Mallo.

Making ribs is not the default state for vertebrates, but is actually an active process of balancing the activities of a remarkable class of genes - the Hox genes.

It was thought that the rib less region of the mouse embryo was the result of a rib-inhibiting programme, driven by Hox10 genes. Indeed, previous studies, in which Hox10 genes were inactivated in the embryo, generated mice with extra ribs. However, by forcing another class of Hox genes (Hox6) to be activated in future rib-less regions of the mouse embryo, scientists have bred mice that also have extra ribs, both in the neck area, and from just after the rib cage, all the way down to the tail, resembling a snake-like skeleton.

These two groups of Hox genes balance each other out: one actively promotes rib formation to produce the thoracic region, while the other blocks this activity in the lumbar region. The whole process relies on first hitting so-called muscle genes in the embryo, which then provide signals to switch on the 'rib' genes to make both ribs and muscle, in a coordinated process. link
Posted by Michael J. Ryan, Ph.D. at 8:18 AM