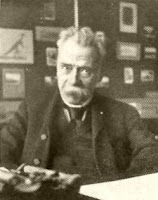 He began as an assistant (1882), became keeper of mammals (1891) at the Royal Museum of Natural History in Brussels where he stayed most of his life. He was a specialist in fossil fishes, reptiles, birds, and their palaeoecology.

He supervised the excavation of the famous, multiple Iguanodons found in 1878 by miners deep underground, at Bernissart, Belgium. image
Posted by Michael J. Ryan, Ph.D. at 7:43 AM