Scientists studying fossils and minerals from Arctic Svalbard, in Norway, have discovered evidence that the ‘greenhouse’ climate of the Cretaceous period was punctuated by a sudden drop in global temperatures. 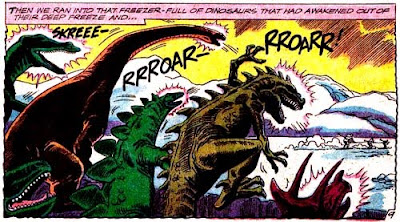 The drop is estimated to have occurred some 137 million years ago during a time when dinosaurs roamed the Earth, and would have seen the islands fall from an average of 13°C (ocean temperature) to as low as four degrees.

Despite being located in the Arctic Circle, Svalbard was home to numerous species of dinosaur and was typically characterised by warm, shallow seas and swamps. But the researchers found evidence in fossils and carbonate materials preserved in marine rocks in the region of a transient shift to cooler glacial conditions around 137 million years ago.

“But over a period of a few hundred or a few thousand years, ocean temperatures fell from an average of 13°C to between eight and four degrees.

“Although a short episode of cool polar conditions is potentially at odds with a high CO2 world, our data demonstrates the variability of climate over long timescales.” link
Posted by Michael J. Ryan, Ph.D. at 9:09 AM