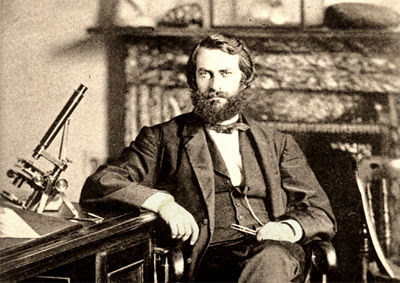 Leidy is known as the "Father of American Vertebrate Paleontology". He described the first relatively complete dinosaur skeleton, Hadrosaurus, and introduced many American and European scientists to the fossil riches of the American West. Leidy's consummate skill in comparative anatomy would allow him to identify and characterize even the most fragmentary fossil material.

Leidy was also the "Founder of American Parasitology," a Professor of Anatomy at the University of Pennsylvania, a pioneering protozoologists, an influential teacher of Natural History, an accomplished microscopist and scientific illustrator, and an expert on a variety of subjects encompasing the earth and natural sciences. He published scientific papers on more than a thousand extinct and living protozoa, fungi and invertebrates and vertebrates as well as an assortment of publications on human biology and medicine. He was also one of the earliest supporters of Charles Darwin.
Posted by Michael J. Ryan, Ph.D. at 7:30 AM