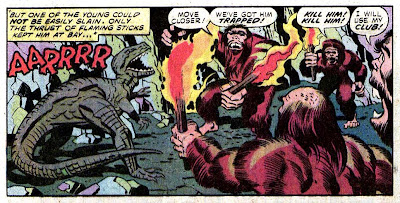 Devil Dinosaur © Marvel Comics
The Neanderthals inhabited a vast geographical area extending from Europe to western Asia and the Middle East 30,000 to 100,000 years ago. Paleoanthropological studies based on morphological skeletal evidence have offered some support for the existence of three different sub-groups: one in Western Europe, one in southern Europe and another in the Levant.

Researchers have given further consideration to the question of diversity of Neanderthals by studying the genetic structure of the mitochondrial DNA (mtDNA) and by analyzing the genetic variability, modeling different scenarios. The study was possible thanks to the publication, since 1997, of 15 mitochondrial DNA (mtDNA) sequences (the mtDNa is maternally transmitted) that originated from 12 Neanderthals.

The new study confirms the presence of three separate sub-groups and suggests the existence of a fourth group in western Asia. According to the authors, the size of the Neanderthal population was not constant over time and a certain amount of migration occurred among the sub-groups. The variability among the Neanderthal population is interpreted to be an indirect consequence of the particular climatic conditions on their territorial extension during the entire middle Pleistocene time period. link
Posted by Michael J. Ryan, Ph.D. at 11:44 AM