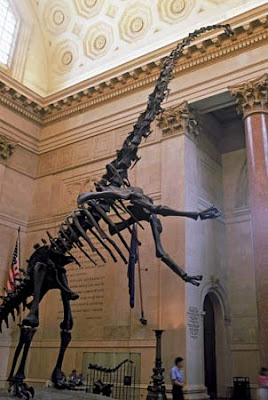 image
From Today In Scince History:

On this day in 1871, the American Museum of Natural History opened to the public in New York City. The Museum’s collection went on view for the first time in the Central Park Arsenal, the Museum’s original home, on the eastern side of Central Park.

The museum began from the efforts of Albert Smith Bickmore, one-time student of Harvard zoologist Louis Agassiz, who was successful in his proposal to create a natural history museum in New York City, with the support of Theodore Roosevelt and J. Pierpont Morgan. The Governor of New York signed a bill officially creating the American Museum of Natural History on April 6, 1869.
Posted by Michael J. Ryan, Ph.D. at 7:06 AM