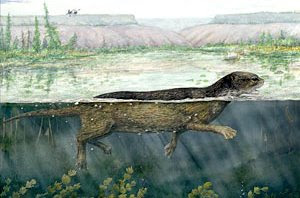 The 24 to 20 million-year-old fossil skeleton of Puijila darwini was found in the summer of 2007 during a fieldwork expedition on Devon Island, Nunavut, in a meteor impact crater. It resembled an otter, but a skull that is more closely related to seals. A "walking seal", Puijila had legs like a terrestrial mammal, but the feet were webbed and adapted for swimming. This surprisingly complete skeleton (about 65%) is the most primitive pinniped skeleton found so far.

"Puijila is the first fossil evidence that early pinnipeds lived in the Arctic," explains Rybczynski. "This discovery supports the hypothesis that the Arctic may have been a geographic centre in pinniped evolution."

Puijila darwin will be on display at the Canadian Museum of Nature in Ottawa from April 28 to May 10, 2009. A model of the skeleton will be included in Extreme Mammals, an exhibition opening May 16, 2009 at the American Natural History Museum in New York, co-sponsered by the Cleveland Museum of Natural History. link