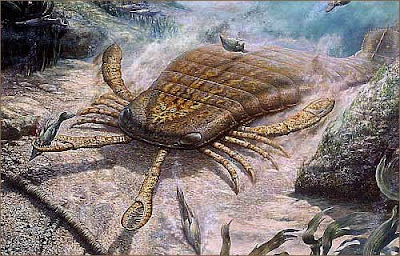 IMAGE
Abstract: Cambrian intertidal sandstones of North America record early excursions of large animals onto tidal flats, where continuous microbial films served as preservational agents for surface tracks. Whereas biomineralized fossils are rare in such lithofacies, trace fossils from the Late Cambrian Elk Mound Group of Wisconsin illustrate how some arthropods might have managed to withstand the vicissitudes of subaerial exposure—by using foreign shells like hermit crabs.

This behavior is suggested by trackways (Protichnites eremita isp. nov.), which have "tail" impressions that are obliquely segmented and always shingled to the left side. These anomalous impressions are best explained by a dextrally coiled shell intermittently touching the sediment.

However, unlike in modern hermit crabs, this shell was too small to house the whole animal. It probably served only to provide a humid chamber that reduced desiccation of the animal's abdominal gills. The dorsal flexure of the tail, in connection with dextral shell coiling, resulted in left-hand shingling of the touch marks
Posted by Michael J. Ryan, Ph.D. at 2:17 PM