Ancient Viruses From The Dawn of Time

Did the Ancient Crenarchael Viruses from the Dawn of Life Survive Exceptionally Well the Eons of Meteorite Bombardment?. 2009. M. Jalasvuoro and K. Jaana. Astrobiology 9: 131-137. 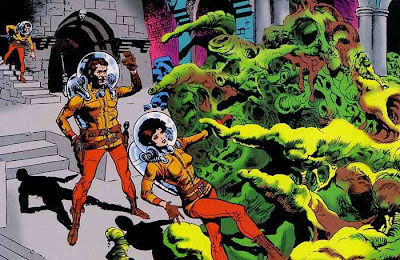 A new study shows that life may have never achieved the complexity necessary for the development of advanced multi-cellular organisms without recurring extinction events.

Their model is based on a type of virus in the archaeal kingdom called Crenarchaeota, which thrives in extremely hot, acidic environments like those found on the bottom of the ocean, where the viruses infiltrate hosts called acidophilic hyperthermophiles. Because crenarchaeal viruses share almost no similarities with other viruses or organisms, they likely originated very early in Earth’s history.

Jalasvuori and Bamford propose that mass extinctions caused by meteorites and volcanoes might have wiped out many cellular organisms, but the hyperthermophiles at the bottom of the ocean would have survived, along with their parasitic viruses.

Acidophilic hyperthermophiles survived the global thermal rises and, therefore, still host a wide variety of ancient virus morphotypes. In contrast, other, more “recent” cellular lineages have lost the majority of their original viruses, as they have been separated geologically and genetically, and have gone through several near-extinction-level episodes of decimation.

This view suggests that, among crenarchaeal viruses, the direct descendants of very early genetic elements are well preserved; thus, their examination would improve our understanding as to how life actually evolved from its origins to the complex cellular systems we see today.

They also present a hypothesis that describes the role of viral armadas and extinctions during evolution, as extinctions may have episodically eliminated most of the abusive parasites. Part of this post from this link.
Posted by Michael J. Ryan, Ph.D. at 10:29 AM