"Synthetic" Evolution In The Lab

The three-dimensional structure (ribbon diagram) of protein DX as a crystallogrpahic dimer. Photo:John Chaput
The building blocks of proteins are 20 different amino acids that are strung together and folded to make the unique globular shape, stability and function of every protein. The mixing and matching of the amino acid chain like numbers in the lottery are what favor the odds in nature of finding just the right combinations to help generate biological diversity.

To select the raw ingredients to create the proteins the researchers began their quest by further evolving a protein that had been previously selected from a pool of random sequences. They started with a small protein stretch 80 amino acids long. This basic protein segment acts as a protein scaffold that can be selected for the ability to strongly clutch its target molecule, ATP.

There was only one problem, the parental protein could bind ATP, but it wasn’t very stable without it. They decided to speed up protein evolution once again by randomly mutating the parental sequence with a selection specially designed to improve protein stability. After subjecting the 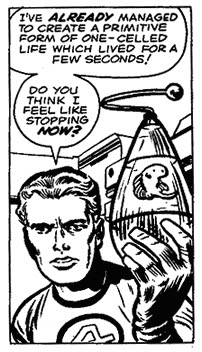 The remaining fragments were identified and amino acid sequences compared with one another. Surprisingly, They had bested nature’s designs, as the test tube derived protein was not only stable, but could bind ATP twice as tight as anything nature had come up with before.

In a surprising result, just two amino acids changes in the protein sequence were found to enhance the binding, solubility and heat stability.

"We have the distinct advantage over nature of being able to freeze the evolution of our lab-evolved proteins at different time points to begin to tease apart this random process and relate it to the final protein function," said Chaput.
Posted by Michael J. Ryan, Ph.D. at 10:12 AM