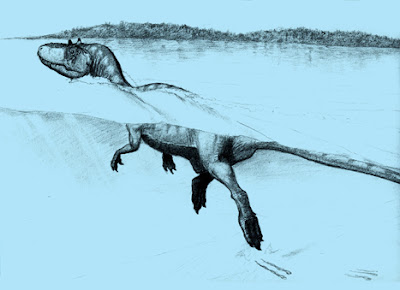 An extraordinary underwater trackway with 12 consecutive prints provides the most compelling evidence to-date that some dinosaurs were swimmers. The 15m long trackway, located in La Virgen del Campo track site in Spain's Cameros Basin, contains the first long and continuous record of swimming by a non-avian therapod dinosaur.

The trackway from the early Cretaceous 125 million years ago consists of 6 asymmetrical pairs of 2-3 scratch marks each. Each set of scratch marks, preserved in a layer of sandstone, averages approximately 50cm in length and 15cm wide. The spacing between them suggests an underwater stride of 243-271cm.

The S-shaped prints paint a picture of a large floating animal clawing the sediment as it swam in approximately 3.2m of water. Ripple marks on the surface of the site indicate the dinosaur was swimming against a current, struggling to maintain a straight path.

"The dinosaur swam with alternating movements of the two hind limbs, a pelvic paddle swimming motion," said Costeur. "It is a swimming style of amplified walking with movements similar to those used by modern bipeds, including aquatic birds."
Posted by Michael J. Ryan, Ph.D. at 8:54 AM