A reconstruction of the brain of the second and most intact cranium found of Aegyptopithecus zeuxis suggests that the species "had a brain that might have been even smaller than that of a modern lemur's," said Simons. "This means the big-brained monkeys and apes developed their large brains at a later point in time." 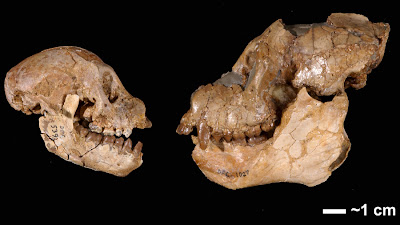 After comparing the known skulls which are of the same age, Simons and his collaborators concluded that the new one came from a female that might have weighed about five and a half pounds, while the first one was from a male of more than twice that size. This size difference between the Aegyptopithecus genders is comparable to that of gorillas, which genetically are humans' second-closest relatives.

Aegyptopithecus' brain is smaller than once thought. "But other features in these skulls, and in many other Aegyptopithecus fossil pieces collected at the Egyptian site over four decades, suggest that this primate was already branching away from its lemurlike ancestry," he said.

"We also find that the visual cortex was large, which means that like many primates, this species likely had very acute vision," he said. "So the visual sense, which is regarded as a very important feature of anthropoids, or higher primates, had already expanded."

The shape of the animal's eye sockets also suggests Aegyptopithecus was active in the daytime, like modern and ancient higher primates. In contrast, many but not all modern prosimians -- the group that includes lemurs -- are active at night, he said.
Posted by Michael J. Ryan, Ph.D. at 9:27 AM