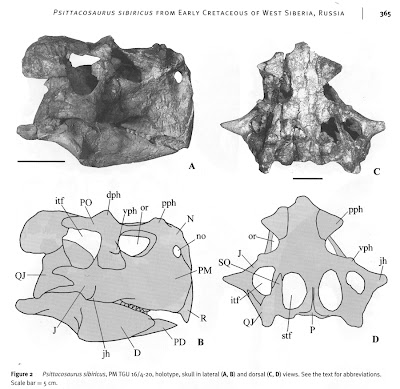 Psittacosaurus sibiricus differs from nine other species of the genus by a unique combination of 32 diagnostic characters, six of which are autapomorphies of the species: small infratemporal fenestra, anteroposteriorly short premaxilla, short medial process of postorbital, deep cleft for qaudratojugal on jugal, extending to the posterior side of jugal horn, angular with prominent tuber and 23 presacrals.

Psittacosaurus sibiricus is the sister species of P. sinensis, with which it shares the prominent pyramidal laterally projecting jugal horn, but more derived than the latter in having more developed palpebral and postorbital horns. The three lateral foramina on the exoccipital/opisthotic are interpreted as exits for cranial nerves X+XI, XII1+2 and XII3, in contrast with previous interpretations. Cranial nerve IX exits the brain cavity through the metotic fissure.

Most Psittacosaurus localities are confined to lacustrine deposits and this animal undoubtedly inhabited areas around the great lakes widely distributed in Central Asia during the Early Cretaceous. The age of the Psittacosaurus biochron is estimated as Hauterivian–Albian.

I'm busy with work and other projects at the moment, plus my computer has died (this is being typed out on one of the old steam-operated models), so postings will probably be light for the next week.