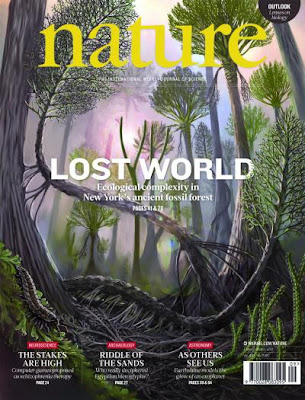 An international team who previously found evidence of the Earth's earliest tree has now unearthed and investigated an entire fossil forest dating back 385 million years.

The Gilboa fossil forest, in the Catskill Mountains in upstate New York, is generally referred to as 'the oldest fossil forest'. Yet by scientific standards it has remained mythical.

Fossils of hundreds of large tree stumps (the 'Gilboa tree') preserved in the rocks were discovered in the 1920's during excavation of a quarry to extract rock to build the nearby Gilboa Dam. Following completion of the dam the quarry was backfilled. In May 2010, the quarry was partially emptied as part of a dam maintenance project. The original quarry floor was reexposed and about 1,300 square meters were cleaned off for investigation.

They describe bases of the 'Gilboa trees' as spectacular bowl-shaped depressions up to nearly two meters in diameter, surrounded by thousands of roots. These are known to be the bases of trees up to about 10 meters in height, that looked something like a palm tree or a tree fern. One of the biggest surprises was that the researchers found many woody horizontally-lying stems, up to about 15 cm think, which they have demonstrated to be the ground-running trunks of another type of plant [a aneurophytalean progymnosperm], only previously known from its upright branches. They also found one large example of a tree-shaped club moss, the type of tree that commonly forms coal seams in younger rocks across Europe and North America. link
Posted by Michael J. Ryan, Ph.D. at 7:56 AM