No Gap in the Middle Permian Fossil Record 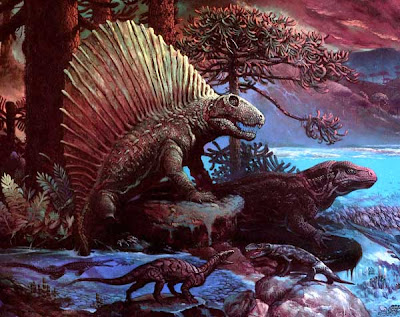 Art © William Stout
New work on fossil reptiles from Russia shows a more continuous evolutionary record than had been assumed. A key concern about the fossil record is that it is incomplete. During the Permian period 300-250 million years ago, the basis of modern terrestrial ecosystem was established. Worldwide climates became warmer and drier, and reptiles rose in importance. The first plant-eating reptiles appeared, and Late Permian ecosystems were broadly comparable to modern ones.

Until recently, however, the Permian record of reptiles was said to be incomplete, with a gap of up to 5 million years. This was because paleontologists had to look at rock successions from different continents, and it seemed there was a major time hiatus between the well-known Lower Permian successions of North America and the Middle and Upper Permian successions of South Africa and Russia.

New dating evidence shows that the Russian rock record overlaps the North American record, and the gap is closed. We can study the story of change in terrestrial ecosystems through the Permian without a major lack of knowledge. link
Posted by Michael J. Ryan, Ph.D. at 10:00 AM