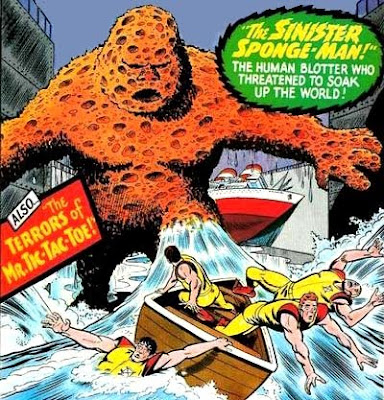 Challengers of The Unknown © DC Comics
Paleontologists have discovered the oldest animal with a skeleton. Called Coronacollina acula, the organism is between 560 million and 550 million years old, which places it in the Ediacaran period, before the explosion of life and diversification of organisms took place on Earth in the Cambrian. The Cambrian Period, marked by a rapid diversification of life-forms on Earth as well as the rise of mineralized organisms, ranges 542-488 million years ago. 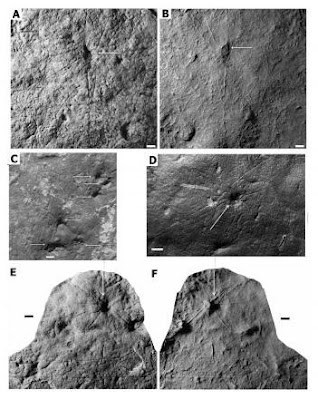 Image: Droser lab, UC Riverside.
Coronacollina acula is seen in the fossils as a depression measuring a few millimeters to 2 centimeters deep. But because rocks compact over time, the organism could have been bigger – 3 to 5 centimeters tall. Notably, it is constructed in the same way that Cambrian sponges were constructed. 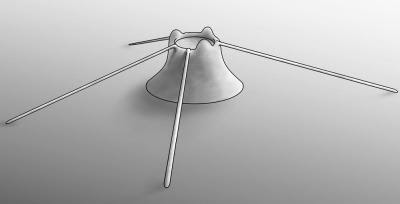 Reconstruction of C. aculla; D.Garson\Droser lab
Coronacollina acula lived on the seafloor. Shaped like a thimble to which at least four 20-40-centimeter-long needle-like "spicules" were attached, Coronacollina acula most likely held itself up by the spicules. The researchers believe it ingested food in the same manner a sponge does, and that it was incapable of locomotion.

The appearance of Coronacollina acula signals that the initiation of skeletons was not as sudden in the Cambrian as was thought, and that Ediacaran animals like it are part of the evolutionary lineage of animals as we know them.
Posted by Michael J. Ryan, Ph.D. at 11:49 AM