The Black Plummage of Microraptor 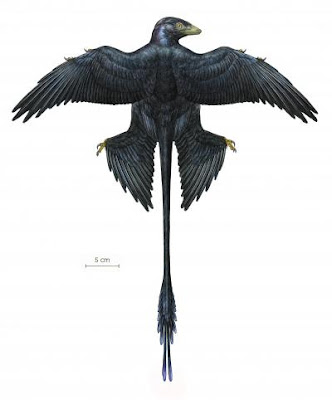 Researchers has revealed the color and detailed feather pattern of Microraptor, a pigeon-sized, four-winged dinosaur that lived about 130 million years ago. The non-avian dinosaur's fossilized plumage, which had hues of black and blue like a crow, is the earliest record of iridescent feather color. 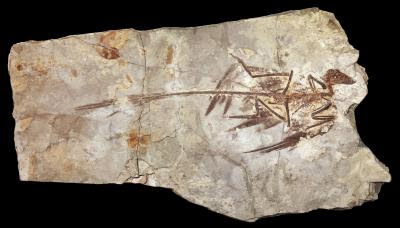 In this study, the researchers compared the shape and density of pigment-bearing organelles called melanosomes from a Microraptor using a scanning electron microscopefossil and comparing them to a database of melanosomes from a variety of modern birds. Statistical analysis of the data predicts that Microraptor was completely black with a glossy, weakly iridescent blue sheen.

The researchers also made predictions about the purpose of the dinosaur's tail. Once thought to be a broad, teardrop-shaped surface meant to help with flight, Microraptor's tail fan is actually much narrower with two elongate feathers. The researchers think that the tail feather was ornamental and likely evolved for courtship and other social interactions, not for aerodynamics. link