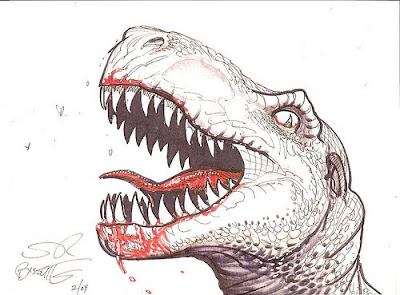 Tyrant © & ™ S. R. Bissette
Abstract: Tyrannosaurs, the group of dinosaurian carnivores that includes Tyrannosaurus rex and its closest relatives, are icons of prehistory. They are also the most intensively studied extinct dinosaurs, and thanks to large sample sizes and an influx of new discoveries, have become ancient exemplar organisms used to study many themes in vertebrate paleontology.

A phylogeny that includes recently described species shows that tyrannosaurs originated by the Middle Jurassic but remained mostly small and ecologically marginal until the latest Cretaceous. Anatomical, biomechanical, and histological studies of T. rex and other derived tyrannosaurs show that large tyrannosaurs could not run rapidly, were capable of crushing bite forces, had accelerated growth rates and keen senses, and underwent pronounced changes during ontogeny. The biology and evolutionary history of tyrannosaurs provide a foundation for comparison with other dinosaurs and living organisms.
Posted by Michael J. Ryan, Ph.D. at 6:20 PM