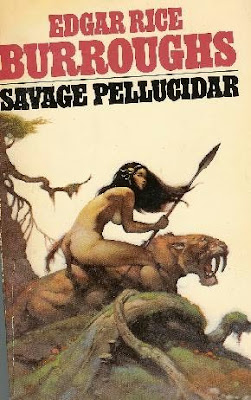 Edgar Rice Burroughs (September 1, 1875 – March 19, 1950) was an American author, best known for his creation of the jungle hero Tarzan and the heroic Mars adventurer John Carter, although he produced works in many genres.

Pellucidar is the hollow Earth milieu for a series of stories featuring David Innes and his inventor friend Abner Perry which they discover using an "iron mole" to burrow 500 miles into the Earth's crust where they find a prehistoric land. From Wikipedia
Posted by Michael J. Ryan, Ph.D. at 2:55 PM