Born This Day: Father of The Devonian Period 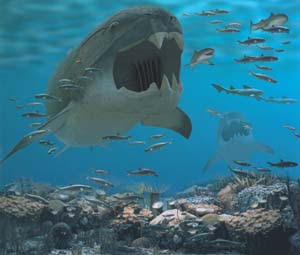 Painting by Dan Erickson of the Phaeton Group
William Lonsdale (Sept. 9, 1794 – Nov. 11, 1891 ) was an English geologist and paleontologist whose study of coral fossils found in Devon, suggested (1837) certain of them were intermediate between those typical of the older Silurian System (408 to 438 Ma) and those of the later Carboniferous System (286 to 360 Ma. Geologists Roderick Murchison and Adam Sedgwick agreed and named this new geologic system after its locale - the Devonian Period (1839).

Lonsdale's early career was as an army officer (1812-15) and later he became curator and librarian of the Geological Society of London (1829-42). He recognised that fossils showed how species changed over time, and more primitive organisms are found in lower strata.
From Today In Science History
Posted by Michael J. Ryan, Ph.D. at 1:32 PM