Oxygen may be the clue to first appearance of large animals on Earth.

The sudden appearance of large animal fossils more than 500 million years ago – a problem that perplexed even Charles Darwin and is commonly known as “Darwin’s Dilemma” – may be due to a huge increase of oxygen in the world’s oceans.

In 2002 scientists found the world’s oldest complex life forms between layers of sandstone on the southeastern coast of Newfoundland. This pushed back the age of Earth’s earliest known complex life to more than 575 million years ago, soon after the melting of the massive “snowball” glaciers. 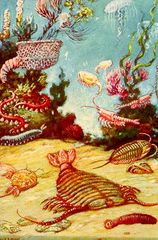 “Our studies show that the oldest sediments on the Avalon Peninsula, which completely lack animal fossils, were deposited during a time when there was little or no free oxygen in the world’s oceans,” says Dr. Narbonne. “Immediately after this ice age there is evidence for a huge increase in atmospheric oxygen to at least 15 per cent of modern levels, and these sediments also contain evidence of the oldest large animal fossils.” Chas. Knight painting