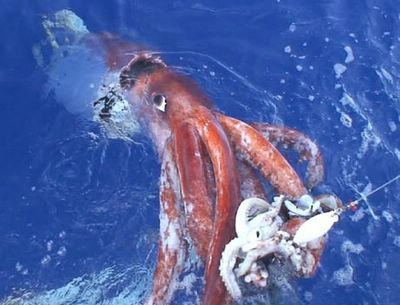 Tsunemi Kubodera, a scientist with Japan's National Science Museum, caught the 7 m long animal earlier this month near the island of Chichijima, some 960 km southeast of Tokyo.

His team snared the animal using a line baited with small squid and shot video of the russet-colored giant as it was hauled to the surface. The squid, a young female, "put up quite a fight" as the team attempted to bring it aboard, Kudobera told the Associated Press, and the animal died from injuries sustained during the capture.

Giant squid, the world's largest invertebrates, are thought to reach sizes up to 18 m, but because they live at such great ocean depths they have never been studied in the wild.
Posted by Michael J. Ryan, Ph.D. at 5:17 PM