Small but remarkable fossils found in New Zealand show for the first time that the so-called "land of birds" was once home to mammals as well. 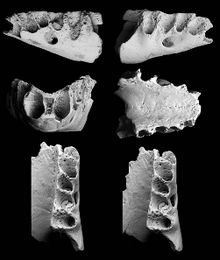 The tiny fossilised jaw (left) and hip (below) bones that belonged to a unique, mouse-sized land animal unlike any other mammal known were unearthed from the rich St Bathans fossil bed, in the Otago region of South Island, NW.

But the real shock to scientists was that it was there at all: until now, decades of searching had shown no hint that the furry, warm-blooded animals that thrived and prospered so widely in other lands had ever trodden on New Zealand soil.

The fact that even one land mammal 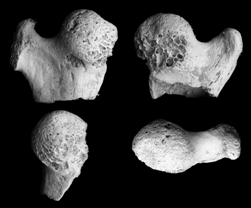 had lived there, at least 16 million years ago, has put paid to the theory that New Zealand's rich bird fauna had evolved there because they had no competition from land mammals.

"It also suggests that New Zealand was not completely submerged, as some scientists thought, when sea levels were high about 25 to 30 million years ago."

The St Bathans fossil field - which has also produced many other species of animals, including fish and birds - also promises to shed new light on climate change in the Australasian region, recording a massive shift from a warm, wet phase to a much cooler and drier period.
Posted by Michael J. Ryan, Ph.D. at 5:57 PM