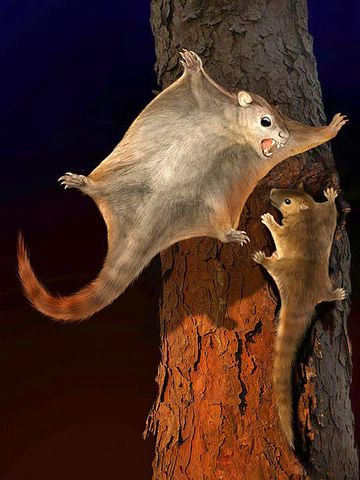 image
Abstract [edit]: Direct evidence of gliding is rare in fossil records and is unknown in mammals from the Mesozoic era. Here we report a new Mesozoic mammal [Volaticotherium antiquus—"ancient gliding beast"] —from Inner Mongolia, China, that represents a previously unknown group characterized by a highly specialized insectivorous dentition and a sizable patagium (flying membrane) for gliding flight.

The patagium is covered with dense hair and supported by an elongated tail and limbs; the latter also bear many features adapted for arboreal life. This discovery extends the earliest record of gliding flight for mammals to at least 70 million years earlier in geological history, and demonstrates that early mammals were diverse in their locomotor strategies and lifestyles; they had experimented with an aerial habit at about the same time as, if not earlier than, when birds endeavoured to exploit the sky.