Abstract: Bone marrow in ca. 10 Ma frogs and salamanders from the Miocene of Libros, Spain, represents the first fossilized example of this extremely decay-prone tissue. The bone marrow, preserved in three dimensions as an organic residue, retains the original texture and red and yellow color of hematopoietic and fatty marrow, respectively; moldic osteoclasts and vascular structures are also present. We attribute exceptional preservation of the fossilized bone marrow to cryptic preservation: the bones of the amphibians formed protective microenvironments, and inhibited microbial infiltration. Specimens in which bone marrow is preserved vary in their completeness and articulation and in the extent to which the body outline is preserved as a thin film of organically preserved bacteria. Cryptic preservation of these labile tissues is thus to a large extent independent of, and cannot be predicted by, the taphonomic history of the remainder of the specimen.

From the Yahoo News Article:

The first fossilized bone marrow has been found in the bones of 10-million-year-old frogs, salamanders and tadpoles by scientists working in northeastern Spain.

"It is still organic in composition, whereas most traces 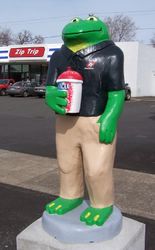 of soft tissues you find in the fossil record, which are very rare anyway, have rotted away and just the shape of the tissue is preserved in mineral," she told AFP.

McNamara said researchers were now doing tests in UCD to see if any bio-molecules, like amino acids and proteins, are preserved. The researchers were able to access the marrow from the fossils because they were found in rock that had split and some of the bones had fractured as a result. McNamara said the original red and yellow colours of the marrow had been preserved. Image Link
Posted by Michael J. Ryan, Ph.D. at 6:53 PM