Edward Drinker Cope Gets In A Fistfight

Remarking on a blackened eye: Persifor Frazer’s blow-by-blow account of a fistfight with his dear friend Edward Drinker Cope. 2015 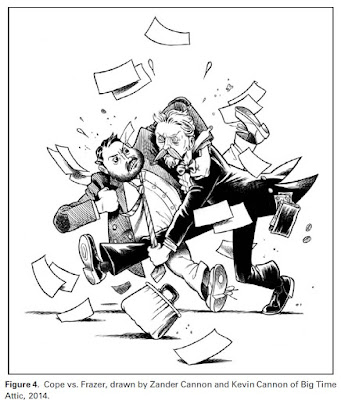 Abstract: Edward Drinker Cope, a brilliant and prolific American naturalist, was notoriously combative. His infamous feud with Yale paleontologist Othniel Charles Marsh, which played out publicly on the front pages of the New York Herald, was one of the worst scandals of nineteenth- century American science. Cope did not fight exclusively with his pen, however.

In 1888, for example, he traded blows with his close friend Persifor Frazer over a matter of honor at the entrance of Philadelphia’s hallowed Philosophical Hall, just as a meeting of the American Philosophical Society was getting under way.

A six-page letter, handwritten by Persifor Frazer and housed in the Frazer Family Papers at the University of Pennsylvania, details the circumstances of their quarrel. An annotated transcription of Frazer’s letter appears here.
Posted by Michael J. Ryan, Ph.D. at 12:16 PM