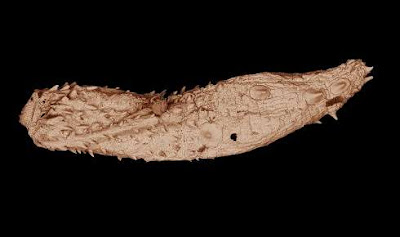 A team of Virginia Tech researchers have discovered fossils of kinorhynch worms – commonly known as mud dragons – dating back more than 530 million years.

The historic find – made in South China—fills a huge gap in the known fossil record of kinorhynchs, small invertebrate animals that are related to arthropods, featuring exoskeletons and segmented bodies, but not jointed legs. The specimen is 0.078 inches in length and l0.02 inches in width, roughly half the size of a grain of rice

The new fossil can tell scientists more about how and why body segmentation evolved many times among not only arthropods, but several other groups of animals. Scientists believe kinos and arthropods should have evolved more than 540 million years ago. More so, the authors found that E. rarus has a number of similarities with living kinorhynchs, suggesting a close evolutionary relationship. Read more at: Phys Org.
Posted by Michael J. Ryan, Ph.D. at 11:51 AM