Synthesis of Phylogeny and Taxonomy Into a Comprehensive Tree of Life. C. Hinchliff et al. PNAS 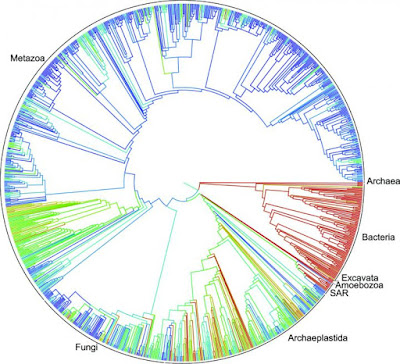 A first draft of the "tree of life" for the roughly 2.3 million named species of animals, plants, fungi and microbes has been released.

A collaborative effort among 11 institutions, the tree depicts the relationships among living things as they diverged from one another over time, tracing back to the beginning of life on Earth more than 3.5 billion years ago.

Tens of thousands of smaller trees have been published over the years for select branches of the tree of life--some containing upwards of 100,000 species--but this is the first time those results have been combined into a single tree that encompasses all of life. PR
Posted by Michael J. Ryan, Ph.D. at 8:41 AM