Alvarez (June 13, 1911 - Sept. 1, 1988) was an American experimental physicist who was awarded the Nobel Prize for Physics in 1968 for work that included the discovery of many resonance particles --subatomic particles having extremely short lifetimes and occurring only in high-energy nuclear collisions. 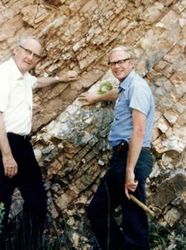 In about 1980 Alvarez (left) helped his son, the geologist Walter Alvarez (right), publicize Walter's discovery of a worldwide layer of clay that has a high iridium content and which occupies rock strata at the geochronological boundary between the Mesozoic and Cenozoic eras; i.e., about 66.4 million years ago.

They postulated that the iridium had been deposited following the impact on Earth of an asteroid or comet and that the catastrophic climatic effects of this massive impact caused the extinction of the dinosaurs. Though initially controversial, this widely publicized theory gradually gained support as the most plausible explanation of the abrupt demise of the dinosaurs.