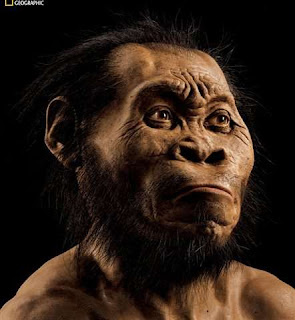 Homo naledi's face by paleoartist John Gurche from Nat. Geo.
Homo naledi (nah-LEH-dee) is a new member of the human family tree. The bones were found by a spelunker about 48km northwest of Johannesburg. The site has yielded some 1550 specimens since its discovery in 2013. The fossils represent at least 15 individuals.

The creature, which evidently walked upright, represents a mix of traits. For example, the hands and feet look like Homo, but the shoulders and the small brain recall Homo's more ape-like ancestors, the researchers said.