A New Age For Peking Man 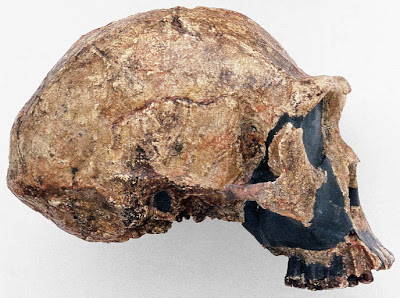 A new dating method has found that "Peking Man" is around 200,000 years older than previously thought, suggesting he somehow adapted to the cold of a mild glacial period.

Granger used aluminum-26 and beryllium-10 radioisotopic dating, which is based on radioactive decay in the mineral quartz. As cosmic rays penetrate into rocks at the Earth's surface, chemical reactions produce these isotopes of aluminum and beryllium. If the rocks are then buried, the isotopes are no longer produced and those existing begin to decay. The rate of decay can tell researchers when the rocks were deposited in a site, he said. The site was found to be 680,000-780,000 years old. Earlier estimates put the age at 230,000-500,000 years old.

"There is evidence that Homo erectus had physically adapted to the cold, but they probably also had to be doing something in terms of behavior to handle the cold of a glacial period in northern China," she said. "There isn't good evidence of fire or any kind of skins or clothing, but evidence of such things doesn't last long and wouldn't be recorded particularly well in the archeological record. It doesn't mean they didn't have them, but we don't have a definitive answer." link