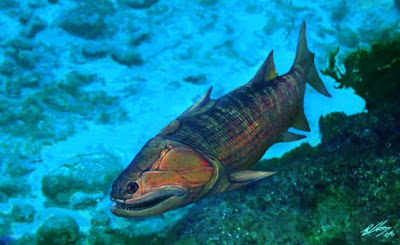 Illo by B. Choo
Abstract: The evolutionary history of osteichthyans (bony fishes + tetrapods) extends back to the Ludlow epoch of the Silurian period. However, these Silurian forms have been documented exclusively by fragmentary fossils. Here we report the discovery of an exceptionally preserved primitive fish from the Ludlow of Yunnan, China, that represents the oldest near-complete gnathostome (jawed vertebrate).

The postcranial skeleton of this fish includes a primitive pectoral girdle and median fin spine as in non-osteichthyan gnathostomes, but a derived macromeric squamation as in crown osteichthyans, and substantiates the unexpected mix of postcranial features in basal sarcopterygians, previously restored from the disarticulated remains of Psarolepis. 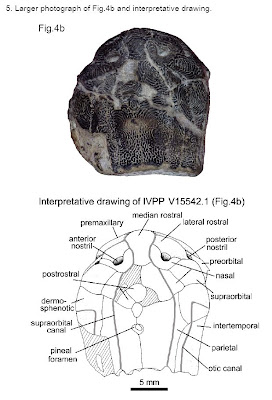 As the oldest articulated sarcopterygian, the new taxon offers insights into the origin and early divergence of osteichthyans, and indicates that the minimum date for the actinopterygian–sarcopterygian split was no later than 419 million years ago.
Posted by Michael J. Ryan, Ph.D. at 11:03 PM