T. rex Wins By A Nose 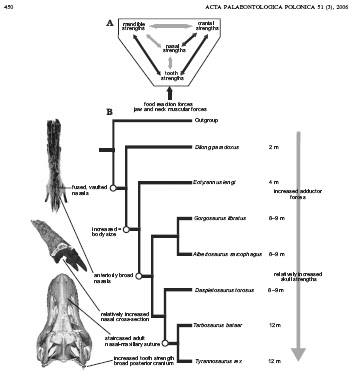 Abstract: Tyrannosaurid theropods display several unusual adaptations of the skulls and teeth. Their nasals are fused and vaulted, suggesting that these elements braced the cranium against high feeding forces. Exceptionally high strengths of maxillary teeth in Tyrannosaurus rex indicate that it could exert relatively greater feeding forces than other tyrannosaurids. Areas and second moments of area of the nasals, calculated from CT cross-sections, show higher nasal strengths for large tyrannosaurids than for Allosaurus fragilis.

Cross-sectional geometry of theropod crania reveals high second moments of area in tyrannosaurids, with resulting high strengths in bending and torsion, when compared with the crania of similarly sized theropods. In tyrannosaurids trends of strength increase are positively allomeric and have similar allometric exponents, indicating correlated progression towards unusually high strengths of the feeding apparatus. Fused, arched nasals and broad crania of tyrannosaurids are consistent with deep bites that impacted bone and powerful lateral movements of the head for dismembering prey.

You can download a PDF of the article HERE

Eric’s a fellow member of the Southern Alberta Dinosaur Research Group and great person to have in the field.

I can't remember if we congratulated Don Henderson who became the new Head of Dinosaur Research at the Royal Tyrrell Museum last summer--if not, a belated tip of the hat!
Posted by Michael J. Ryan, Ph.D. at 9:42 AM