Abstract: Examples of sympatric speciation in nature are rare and hotly debated. We describe the parallel speciation of finches on two small islands in the Tristan da Cunha archipelago in the South Atlantic Ocean. Nesospiza buntings are a classic example of a simple adaptive radiation, with two species

on each island: an abundant small-billed dietary generalist and a scarce large-billed specialist.

Their morphological diversity closely matches the available spectrum of seed sizes, and genetic evidence suggests that they evolved independently on each island.

Speciation is complete on the smaller island, where there is a single habitat with strongly bimodal seed size abundance, but is incomplete on the larger island, where a greater diversity of habitats has resulted in three lineages. Our study suggests that the buntings have undergone parallel ecological speciation. stamp 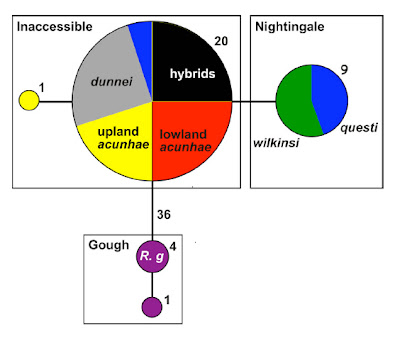 An unrooted allele network of mtDNA cytochrome b gene among Nesospiza shows that populations are separated by island rather than by traditional species boundaries. All branches are single mutations, unless otherwise specified alongside the branch. Sample sizes are shown adjacent to alleles.