Evolution of The Inner Ear 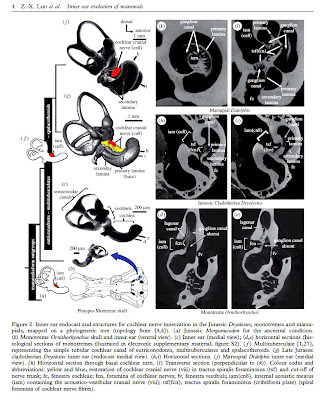 The embryogenesis of the cochlear nerve and ganglion in the inner ear of mice is now known to be patterned by neurogenic genes, which we hypothesize to have influenced the formation of the auditory nerve and its ganglion in Jurassic therian evolution, as shown by their osteological correlates in Dryolestes, and by the similar base-to-apex progression in morphogenesis of the ganglion in mice, and in transformation of its canal in phylogeny. The cochlear innervation in Dryolestes is the precursory condition in the curve-to-coil transformation of the cochlea in mammalian phylogeny.

This provides the timing of the evolution, and where along the phylogeny the morphogenetic genes were co-opted into patterning the cochlear innervation, and the full coiling of the cochlea in modern therians. link
Posted by Michael J. Ryan, Ph.D. at 2:49 PM