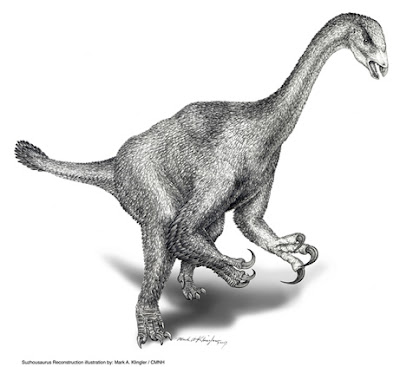 A team of Chinese and American paleontologists have named a new dinosaur: Suzhousaurus megatherioides (“giant sloth-like reptile from Suzhou”) that lived approximately 115 million years ago in what is today Gansu Province in northwestern China. The new dinosaur was formally announced in the Chinese journal Acta Geologica Sinica.

In an analysis of the relationships of the animal, the team found that its closest known relative may be a dinosaur called Nothronychus, which has been found only in somewhat younger rocks in New Mexico and Utah.

Also, from the March edition of Acta Geologica Sinica:

Jinfengopteryx Compared to Archaeopteryx, with Comments on the Mosaic Evolution of Long-tailed Avialan Birds. 2007. JI Shu'an and JI Qiang.

Jinfengopteryx is a newly uncovered Archaeopteryx-like avialan bird outside Germany, which was found from the Jehol Biota of northern Hebei in northeastern China. It shares many characters only with Archaeopteryx by the possession of three fenestrae in the antorbital cavity, 23 caudal vertebrae and long tail feathers attached to all the caudal vertebrae.

A new genus and species of nodosaurid dinosaur: Zhejiangosaurus lishuiensis gen. et sp. nov. is erected herein. It is characterized by the sacrum consisting of at least three true sacral vertebrae, 5 caudal dorsal vertebrae fused to form the presacral rod, wide divergence of long slender preacetabular process of the ilium from the middle line of the body, and the fourth trochanter located at the femoral mid-length.