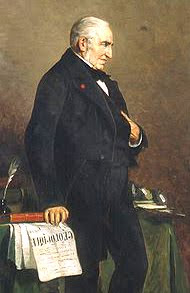 d'Halloy (Feb. 16, 1783 - Jan. 15, 1875) was a Belgian geologist who was an early proponent of evolution and was acknowledged by Charles Darwin in his preface to ‘On The Origin of the Species’ for his opinions on the origin of new species through descent with modification.

He determined the stratigraphy of the Carboniferous and other rocks in Belgium and the Rhine provinces, and also made detailed studies of the Tertiary deposits of the Paris Basin. link
Posted by Michael J. Ryan, Ph.D. at 10:13 PM